Striped Sudoku
Why not try our own new puzzle type - the Sudoku Stripe? Somewhere hidden in the puzzle is a set of consecutive numbers that you can make use of when looking for the solution.
Read More

When you have solved several regular Sudoku 9x9 puzzles you may wish for a bit of a change. Although Sudoku Dragon offers a range of ten different puzzle sizes from the humble 4x4 up to massive 20x20 and six levels of difficulty for each size, the solution process can being to feel much the same.

Our Sudoku Stripe is just one of the variations on the Sudoku theme offered by the puzzle solver. The stripe consists of an ordered row, column or region hidden somewhere in the grid. In this case (a 12x12 puzzle) it is hidden in column j.

In addition to the Stripe, Sudoku Dragon offers some stranger alternatives. The first one is closely related to the stripe, but instead of an ordered row there is a nine letter word hidden somewhere in the grid as a row; column or region. Letters are used instead of numbers, and the letters to choose from change from one puzzle to another. In the following example Sudoku word puzzle there is the hidden word DIPLOMATS in row B. So at the same time as using the Sudoku strategy you can be wracking your brains for anagrams! 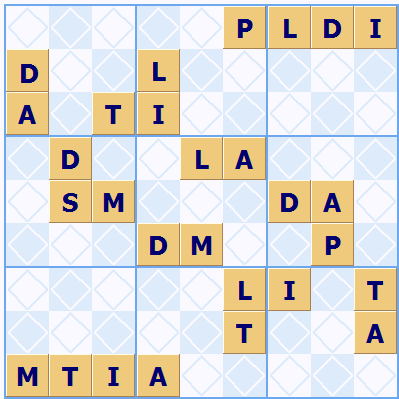 Adding the diagonals of Sudoku as two additional groups, so that all the numbers must be unique in each diagonal as well as all rows; columns and regions, adds a some more complexity. Now a square on the diagonal belongs to three sub-groups and not just the normal two. The end effect is that X-Sudoku or Diagonal Sudoku puzzles can be a welcome change. 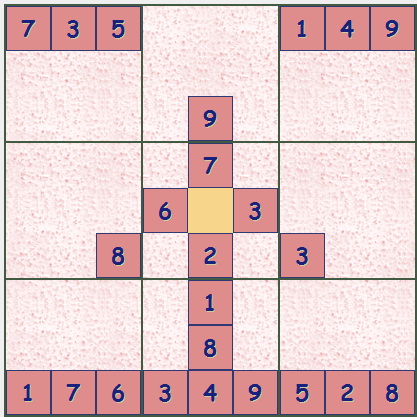 The fourth puzzle type provided by our Sudoku solver software is more of a challenge. In this variation the normal square or rectangular regions are replaced by odd shapes. Each region still has the same number of squares as the rows and columns; and so many but not all of the Sudoku strategies still work. It is often termed 'Jigsaw' or 'Squiggle' Sudoku to emphasize the odd shapes of the regions. The Two out of Three strategy no longer works and the shared subgroup rule needs to be adapted. A row (or column) no longer has the same number of shared squares as its neighbors. Sudoku Dragon devises a new jigsaw pattern each time it generates a puzzle. So you may need to rethink your solving strategies a little each time. 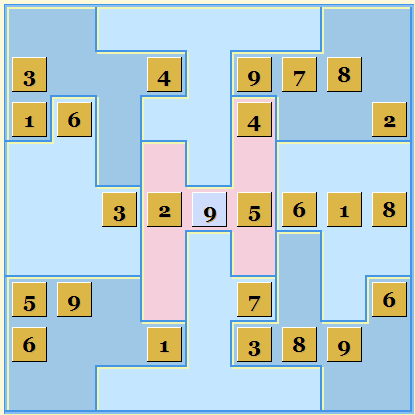 Samurai Sudoku is another type provided by Sudoku Dragon which consists of five overlapping puzzles. The square grid has not one but up to five regular Sudoku puzzles, but some of the squares are shared between them. Samurai can make a very difficult challenging puzzle. We provide a 8x8 (with 4 numbers and 3 sub-puzzles) and a 21x21 (with 9 numbers and 5 sub-puzzles) sized version. 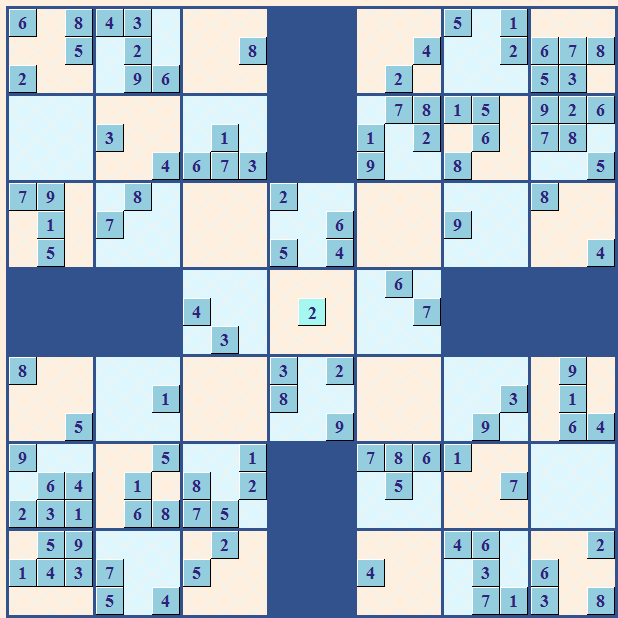 For more information on these and other variations of Sudoku visit our puzzle type page.

Give the SudokuDragon a free 23 day trial by visiting our download page.
Try out all the many types of Sudoku puzzle.