Striped Sudoku
Why not try our own new puzzle type - the Sudoku Stripe? Somewhere hidden in the puzzle is a set of consecutive numbers that you can make use of when looking for the solution.
Read More

When you are told a number can go in a Sudoku square it is very useful to be given an explanation. Many other Sudoku puzzle solvers do not give detailed explanations of what can go where and more importantly why.

Sudoku Dragon gives a clear explanation of why certain numbers are not possible according to the Sudoku rules. You select the 'depth' of analysis to determine which strategies will be made use of in making the analysis. As you increase the 'analysis depth' squares marked as 'looking possible' may be excluded to reflect subtler strategy rules. In the case illustrated only the numbers 6 and 8 are possible as all the other possibilities are excluded due to conflicts with a number in a row, column or region.

The possibility panel is conveniently located just to the right of the main puzzle display and can be activated by just pressing the F11 key. 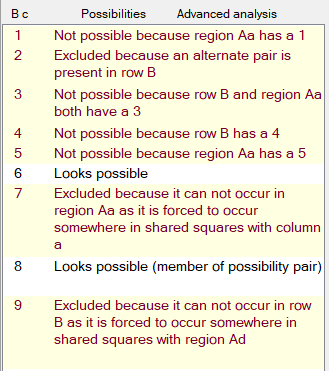 You can download Sudoku Dragon for a free 23 day trial and investigate the possibility explanations for yourself. Go to our download page.