Sudoku Dragon has a unique way of indicating what is possible and what is not possible for squares in the puzzle.

In this screen shot the top left region of a 9x9 puzzle is shown. Of the nine squares only four have been allocated. Sudoku Dragon's full possibility analysis options have been selected and so the smaller numbers in the unallocated squares show what are permitted by the rules of Sudoku.

Sudoku Dragon uses the exclusion rules that are used to help solve squares, one square in the group has a dark gray background indicating that 4 cannot occur here because of the shared sub-group rule. 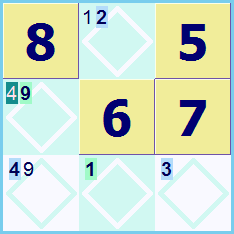 You have full control on how the possibility analysis is displayed. The previous example shows it with the full display options switched on, but you can choose other options including:

All highlighting of possibilities switched off.

Highlighting of squares where a 4 can occur.

No automatic possibilities displayed, you need to work them out yourself.

Here's a more detailed explanation of what the colors and numbers all mean. First let us look at the whole Sudoku as that controls a lot of the possibilities in region Aa. 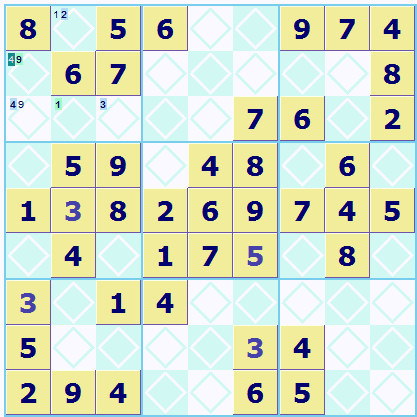 Give Sudoku solver a free 23 day trial by visiting our download page.
It will give you a hint on solving all those difficult squares.