Other topics in this forum

What makes a 'Difficult' puzzle

Trial and Error - The Labyrinth

Is Sudoku a game of Mathematical symmetry?

Is placing the correct candidates part of logic?

The strategy page on this site includes a section on the X-Wing strategy. There is also a step-by-step guide to X-Wing here.

I'd managed so far without using anything quite as complex looking as this. Is that experience just me or do my fellow puzzle solvers also find that they can cope without frying their brains trying to find these obscure patterns in puzzles?

Any comments ? Click here to contribute
Looks like a swordfish (re: X-Wing and Swordfish) contributed by SudokuDragon

Sort of Swordfish with 5 in Bb Hf 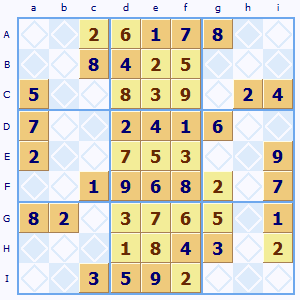 Yes, I agree you haven't overlooked anything too easy.

I can't see anything forced by the only choice; only square; subgroup exclusion or twin exclusion sudoku strategies.

In this case it is the '5's that are helpful. In row F there are only two options Fb or Fh. If it was Fb then that has knock on effects, in row H the 5 would have to be in Hc but in area Da the only square left would be Dc. So putting 5 in Fb would require a 5 in the same column c for Dc and Hc. This can not be right - the 5 must go in Fh - no other choice.

If you do that sudoku assignment the rest follows fairly easily I think.

Any comments ? Click here to contribute
Question to Alexander (re: Challenging Progress) contributed by CBK

You said, about the puzzle "Another challenge": "In this case it is the '5's that are helpful. In row F there are only two options Fb or Fh. If it was Fb then that has knock on effects, in row H the 5 would have to be in Hc but in area Da the only square left would be Dc. So putting 5 in Fb would require a 5 in the same column c for Dc and Hc. This can not be right - the 5 must go in Fh - no other choice."

When you talk about the two options for the 5s in F, I see you. When you say 5 in Fb, the 5 in the H row is Hc, I see that. But when you bring up the Da box(area), and say that "the only square left would be Dc", I don't follow you.

Obviously if you were to place a second 5 in that box, it would have to in Dc and would be in conflict with the 5 in Hc. But that is two 5s in the same box Fb and Dc!?!

I did a check on that option, it is works, out, but I obviously don't understand the logic.

Could I get some help?

Any comments ? Click here to contribute
Mea Culpa (re: Question to Alexander) contributed by Alexander

Sorry, yes I was wrong, not sure what I was thinking.

I still think the correct strategy was to choose between Fb and Fh for where to place a 5.

If you choose Fb you can prove this is incorrect - but by a longer chain than I thought - however all the steps are straightforward 'forced' choices (only place or only square).

It now gets to the crunch in column b. 1 must go in Ib but this forces an impossible allocation of 3 - it must go in BOTH Bb abd Db. This means the initial Fb choice was wrong - it must be the other alternative.

There's probably a better way of proving this but I can't see one.

Any comments ? Click here to contribute
X-Wing aid (re: X-Wing and Swordfish) contributed by Nivlem

Yes they are useful, really.

Many of the challenging level of difficulty puzzles on this site require the use of X-Wing.

They crop a lot in the larger 16x16 sudoku grid puzzles too.

That's probably because there are so many more squares and the pattern of matching rows and columns required for the X-Wing are much more likely to occur.

Here is a puzzle that has an X-Wing in it. 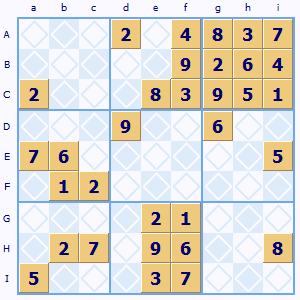 Any comments ? Click here to contribute
X-Wing Tutorial (re: X-Wing and Swordfish) contributed by SudokuDragon

With release 15 of Sudoku Dragon there is an animated tutorial for the X-Wing strategy as well as new ones for naked twins, naked triplets and naked chains.

To run the tutorial just download the program and select the X-Wing tutorial. There is also a step-by-step guide to X-Wing online on our site.

Any comments ? Click here to contribute
More swordfishes (re: X-Wing and Swordfish) contributed by wcmead

The swordfish example and discussion on the strategy page does not appear to be complete. Are there some constraints on the swordfish construction that are not stated?

What is missing here?

Any comments ? Click here to contribute
One more (re: More swordfishes) contributed by Alexander

I believe there is one further Swordfish in the example Swordfish puzzle on the strategy page but not the one you suggest.

The rules is that you need three rows and columns with only a pair of particular possibilities in them.

There is another Swordfish there though with row A; row E and Row I all having just a pair of '9's and they interconnect via columns c; f and g. Using these you can discount the possibility in Gf and Fg. These are some of the same squares discounted by the example Swordfish shown on the strategy page. This often happens, there is more than one way to skin cat!

Any comments ? Click here to contribute
What is a swordfish (re: One more) contributed by wcmead

Re. Alexander's comment on the swordfish definition: either the rule Alexander offers is wrong or else the example on the x-wing/dragon page is wrong. The example of the swordfish with 9's has four 9's in row F and three 9's in row G. The example, however, does have only two nines in each of its columns, and this is fundamental to the removal of the extra 9's in rows F and G. But, if we accept the definition that fits the example, namely exactly two 9's in EITHER rows OR columns, we return to the paradox I originally mentioned, namely that there is another swordfish that results in different removals. Something fishy here!

Any comments ? Click here to contribute
Here they are (re: What is a swordfish) contributed by Alexander

I've included a picture of the Swordfish puzzle to make it clear what I meant. 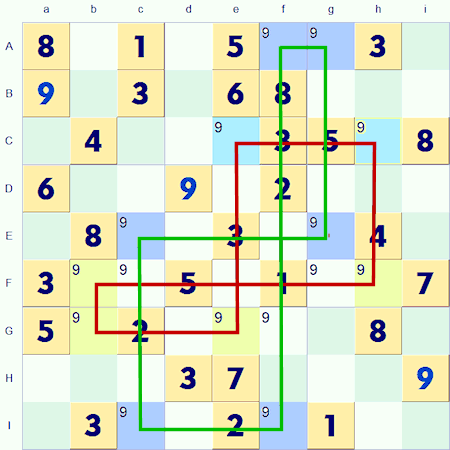 The rows that have pairs of '9's have been highlighted in blue: Row A; C; E and I.

The columns that have pairs of '9's have been highlighted in yellow/green columns b; e and h

As Ce and Ch are in both rows and columns I've colored them bright greeny blue.

That means there is a swordfish through columns b;e and h (as these columns all have only pairs of possibilities) shown as a red line

This is the example swordfish on the strategy page.

The Red swordfish knocks out the possibilities in Fc; Fg and Gf as they are in the same rows as corner points of the red swordfish.

The second swordfish that I indentified in my response is in green colored line.

It is in rows A;E and I (as these rows all have only pairs of possibilities)

The Green swordfish knocks out possibilities in squares Fc; Fg and Gf (the same squares) as they are in the same columns as corner points of this green swordfish.

Any comments ? Click here to contribute
Swordfish crystal clear (re: Here they are) contributed by wcmead

Thanks, Alexander, for an excellent write-up. The key to my understanding is that the swordfish corners are unique in rows OR columns, which was my thought, but was not clear from the Strategy page.

I would nominate your description as a replacement for the Strategy page-- it is much clearer than the present content.

Any comments ? Click here to contribute
Colored Swordfish (re: X-Wing and Swordfish) contributed by John T

The above is written in the Swordfish section. What am I not getting? Is Gf not a 6? And why is it not filled in as a 6? There can only be a 6 in that square.That would make the above "Gi" statement not true......

I am new to advanced Sudoku...I am wondering is there something real obvious I'm not getting

Sudokudragon is just showing squares where a 6s might possibly go, and not showing the other numbers.

Yes Gf must take a 6, but for other reasons than Swordfish and Alternate Pairs, it must be a 6 because of the shared sub-group rule in Row H. So may be a better example should have been chosen. It shows that you can use different rules to achieve the same end result. Gi can not take a 6, both because of Alternate Pairs and also because of Shared Sub-groups.