Other topics in this forum

What makes a 'Difficult' puzzle

Trial and Error - The Labyrinth

Is Sudoku a game of Mathematical symmetry?

Is placing the correct candidates part of logic?

It's useful to look out for 'C' or similar shaped solved squares in a region. What I mean by this is an arrangement of one completed row/column of three with one other row/column with two squares solved. That can make the missing Sudoku square in that row/column easy to solve. 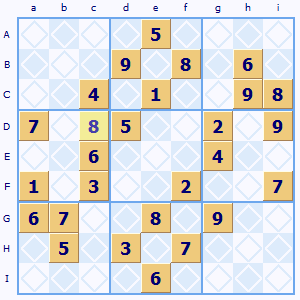 Not sure I understand what you are on about here, Alexander.

The shape is only very rarely a 'C' it can be any shape, I think you mean that there is one row of three and then row of two solved. As there is only one square left in the second row it's fairly obvious that this square should be worth checking to see if it can be solved.

Any comments ? Click here to contribute
Other Shapes (re: C Shaped?) contributed by Alexander

My point was that the unallocated square in the sub-row or sub-column is often a good one to investigate. Look at the regions in the same row (or column) and see if any numbers are forced to go into that square.