It's often useful to know which Sudoku squares you have allocated, particularly when you have made a guess as to what should go in a Sudoku grid square.

Our Sudoku Solver maintains an allocation list which you can be displayed to the right of the grid. It shows the row and column of the Sudoku square allocated in the grid; the number (or letter) allocated to the square; the step number within the list and the time taken to deliberate over making the choice. The final column gives text describing the allocation. If you used the Automatic allocation command to allocate it then this will indicate the reason why it chose the square. It also shows any descriptive text associated with the square (and a star displayed in front of the row). An orange ball indicates a square you allocated. The list also records when you make tentative possibility assignments to squares. The Undo command undoes and deletes the last step in the list; the Redo command redoes a previously undone action - it will re-appear at the bottom of the list. You can 'undo' as many steps as you like and the steps are remembered when you save a puzzle and continue it later on. This is very useful if you find you need to backtrack after making an incorrect guess. When you print the puzzle out you can choose to include this list of allocation steps. 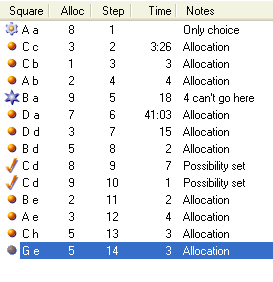 Have a look at the allocation list for yourself; the SudokuDragon is available for a free 23 day trial from our download page.