Have you wondered why many Sudoku puzzles look appealing? Here are some examples puzzles that have a striking pattern of initial allocated squares.

All of these show a four-fold rotational symmetry pattern, each quarter (top left, top right, bottom left and bottom right) are the same except that they are rotated through a right angle (90°).

The symmetry of the revealed squares was the innovation made by Nikoli that led to the increased appeal of Sudoku. This pattern of squares is also used in crosswords; the grid pattern is not just random it looks the same even if the crossword is rotated.

If you let the reveal pattern to be 'random' the puzzle just looks less attractive, however it may prove more of a challenge to solve.

Mathematical readers will know that you can repeat a pattern by rotating it or reflecting it in a mirror - making a mirror image. In the case of the first set of Sudokus with 90° rotational symmetry you can achieve the same effect with mirrors, by putting one through the horizontal center and one through the vertical center. The same is not true with the 180° rotational symmetry puzzles, you can not place a 'mirror' in the grid to achieve the same pattern.

Here are two examples of mirror symmetry - one vertical and one horizontal that are valid Sudokus but you won't find this used in many puzzle books or magazines. 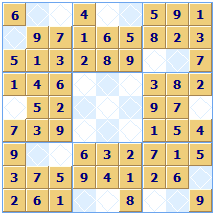 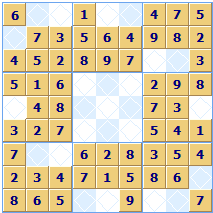 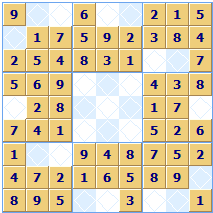